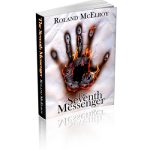 Isolated and far from prying eyes on the mainland, a new kind of narcissist named James Strang crowns himself

king and declares Beaver Island a sovereign nation. Polygamous marriages, confiscated property, public floggings, and even rape are all part of life on Beaver Island after King Strang arrives in 1848 and sets up his own brand of Mormonism.

A hundred years later, a young Saint Louis socialite named Abby Finlay hears all the stories about King Strang during summers spent vacationing with her family in Charlevoix, just sixteen miles from Beaver Island, never suspecting she had any connection to King Strang.  And why should she?

On a humid summer afternoon in 1954, the Post Office delivers a letter to Abby’s doorstep, a letter that had been lost in the postal bureaucracy for a decade.  The heavily stained envelope contains a message from her fiancé, absent since the D-Day invasion. Hoping her fiancé is alive and waiting for her, she makes an urgent trip to be reunited with him in Charlevoix, the place, after all, where they fell in love.

Her journey to find her fiancé forces her to confront the agonizing truth of her own past. Beneath the surface of her Camelot perfect world, transgressions, long hidden, burble like a simmering caldera, waiting for that certain awful moment to erupt and rip apart Abby’s life.  And just when she’s at her most vulnerable, The Seventh Messenger enters her life, threatening to pull her into his surreal world.

“…the plot is unique, irresistible and quite fun.” –Maria Josey, ExpertSubjects.com

A crisply written novel, based on a bizarre but true historical event. There’s a nice interplay between the past and the present. Great descriptions of Michigan and well-conceived characters add to the pleasure of reading Mr. McElroy’s first novel.

I loved this book and only wished I could have read it on the beautiful beaches of Lake Michigan where it takes place! It’s a fun read and there was never a dull moment. The story of James Strang was particularly interesting, I almost couldn’t believe that his character was based on a real person! I highly recommend this book to anyone who loves a great story.

A fun and compelling read, ending with a surprising twist! The exciting twists and turns of the novel glide on an underlying philosophical mood that everything in this world must be connected. The book will have a special attraction for northern Michigan aficionados--evoking nostalgia in identifying with many of the scenes, locales, and even the personalities of some of the characters depicted in the novel.

This author's first novel, a romantic mystery thriller set in northwestern Michigan, highlighting locales in and around the picturesque town of Charlevoix and the curious true history of the settlement of the Beaver Island archipelago, deals with the puzzle surrounding the whereabouts of a stash of gold and the compulsive search for it, ongoing for a hundred years.

The story unfolds alternately as two separate tales --- one being the historically accurate account of James Jesse Strang, an eccentric Mormon convert and wannabe leader of the Mormon throng after the assassination of its founder Joseph Smith in 1844 in Nauvoo, Illinois. Displaced however by Brigham Young, the disgruntled but charismatic Strang set up his own distinct brand of Mormonism, ultimately leading his flock to settle on Beaver Island in northern Lake Michigan. By 1850 Strang had himself crowned "king" of his quirky realm, a unique event in U.S. history. After being mortally wounded by the gunshot of a disaffected follower in 1856, rumors of Strang's stash of gold spread like wildfire.

The parallel tale, purely fictional, is of the novel's protagonist, Abby Finlay, a young St. Louis socialite compelled a century later by fate and destiny to become obsessed with solving the mystery of Strang's gold. Her search leads her back, in 1954, to the adored haunts of her youth at the up-scale Charlevoix resort where her family once owned a summer cottage. The author weaves a tale of intrigue and adventure as Abby gradually unearths clues pointing towards a possible resolution of the mystery. Several colorful characters populating the resort as well as Abby's new-found friend, the handsome young editor of the local Charlevoix newspaper, help in her search --- a rousing adventure reminiscent in style of Indiana Jones. The two tales are intertwined not only by the search for the gold, but also by the improbable, but true, story of yet another religious sect, the House of David whose zealous leader established his own bizarre religious community on High Island, just west of Beaver, in the early 1900's.

The exciting twists and turns of the novel glide on an underlying philosophical mood that everything in this world must be connected.

An enchanting story that draws you in immediately! The dual timeline provides a steady rhythm to the novel with two—equally compelling—plots. This is a well-researched novel of historical fiction with characters so peculiar, it’s hard to believe the story is based on true events. I highly recommend adding The Seventh Messenger to your reading list this year!

I was hooked by the end of the first chapter! This book is a must-read for anyone who likes a good adventure story. Now I want to go visit Northern Michigan and see where this story took place!

My book club LOVED this book! Just the right length and a real page-turner. The characters really came to life. We are wondering if Mr. McElroy plans a sequel?

A friend gave me this book to read, and I had no idea what to expect. Needless to say, I will be calling on my friend to make my next book choice! McElroy doesn't just describe the environment of a summer in Charlevoix on Lake Michigan, but brings the reader to a time a place that few have been privy to, until now. He seamlessly shifts between the 1850's and 1950's, creating two distinct but connected story lines. This novel is Under the Banner of Heaven meets National Treasure!