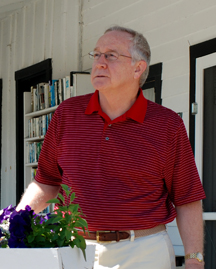 Roland McElroy was born near the end of World War II in the little town of Quitman, Georgia, a rural community about ten miles from the Florida line. Census takers count about 4,000 residents, give or take a couple of hundred, every ten years. In the 1950s, grainy black and white televisions offered young McElroy about the only glimpse of the world beyond the city limits. The local Carnegie library thus became his portal to places unknown. Tales of Tom Swift and his Amazing (fill-in-the-blank) machine stimulated a life-long love of stories and story-telling.

As a teenager, McElroy became a disk jockey on the local radio station, playing hit tunes from the likes of Elvis, Chuck Berry and Little Richard. Later, he worked at Athens, Georgia radio stations to support himself while pursuing degrees in economics and journalism at the University of Georgia.

Any thought of a post-graduate career in radio or television, however, was put aside when an opportunity to work with Governor Jimmy Carter on his “Goals for Georgia” program came along in 1971. McElroy snapped it up and thus took his first step into the political arena. Through his experience with the Goals program, McElroy met state representative Sam Nunn, an ambitious young attorney from Perry who was looking for an opportunity to run for Congress. Intrigued, McElroy offered his services and joined the effort to put Sam Nunn in the US Senate. An improbable victory followed in the fall of 1972, and soon thereafter, McElroy was off to Washington to join Nunn’s Capitol Hill staff. He spent fifteen years with Nunn, first as Press Secretary, and later, as Chief of Staff. In the late 1980s, McElroy became Chief of Staff to Senator Chuck Robb of Virginia, and in 1996, McElroy left Capitol Hill to begin a career in freelance writing.

But his love of books and story-telling never waned.  When grandchildren arrived, he was inspired to capture for their amusement a Christmas story he had shared often with his own children when they were growing up—The Great Mizzariddle. It was the first in a series of self-published children’s books which soon included Jibicle & Cokie, and The Squiggle & Me.   The Seventh Messenger, a novel, was inspired by real-life characters he met at his family’s Michigan vacation home.

McElroy and his wife, Bettie, live outside Washington, DC, in the suburb of Falls Church, Virginia.